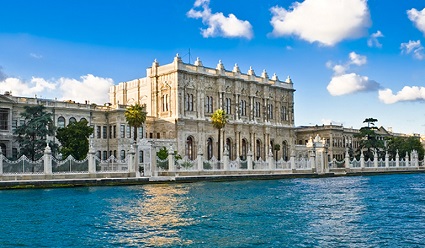 The facade of the Dolmabahce Palace, built in the mid-19th century by Sultan Abdulmecit I, stretches for 600 m along the European shore of the Bosphorus. The vast reception salon, with its 56 columns and four-and-a-half ton crystal chandelier with 750 lights, never fails to astonish . At one time, birds from all over the world were kept in the Bird Pavilion for the delight of the palace’s privileged residents. Ataturk, founder of the Turkish Republic, died in the palace on November 10, 1938.

Dolmabahçe Palace, whose construction began in 1846 in the province of Besiktas was completed in 1856. The palace which was commissioned by Sultan Abdulmecid was built on an area of 250.000 m², and the palace itself and main outhouses were built on sea-filled surface.

The palace is comprised of a main unit, Heir Section, Furniture and Guards’ Room, Operational Mansions, Glass Mansion and other small pavilions. Dolmabahce Palace which has 8 spacious saloons and 200 rooms, has two main and seven side gates and five gates on the sea front.

While the gardens are arranged in four sections, the main building comprises of three sections, namely the State Office (Mabeyn-i Hümayun), Auction Hall and Private Office. The main front of the palace overlooking the sea, Private Office is a two-storey building. Süfera (envoy) Saloon on the upper floor of the palace is one of its most impressive sections. Auction Hall rises between the State and Private Offices as a monumental structure. It is built on a square-like surface, covered with a dome from the inside and a roof from the outside. It is adorned with rich decorations.

The Private Office of Dolmabahce Palace is made up of Sultan’s Office and harem. Harem is a plain section with grand common-use places and closed private rooms.