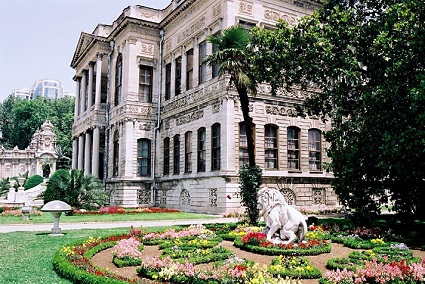 In addition to the State Pavilions at the Yildiz Palace complex, the compound includes a series of pavilions and a mosque. It was completed by Abdulhamit 11 at the end of the 19th century.

The Sale, the largest and most exquisite of the buildings, reveals the luxury in which the sultans lived and entertained. Set in a huge park of flowers, shrubs and trees gathered from every part of the world, the palace grounds offer one of the most beautiful panoramic views of the Bosphorus. Because of restoration work, only the Sale and park are open to the public.

Yildiz Palace is located inside a 500.000 square-meter woods between Besiktas and Ortakoy provinces and is comprised of a mansion, summer palace, administrative and service buildings. The palace got its name from the mansion which was commissioned by Sultan Mahmud the 2nd in this woods. This mansion was decorated by his son Abdülmecid and placed his cerubine named Yildiz. Sultan Abdülmecid’s mother Bezmialem Sultan commissioned for a mansion in 1842 named Dilkusa Summer Palace (Kasr-I Dilkusa) and therefore helped expandYildiz Palace. During the period of Sultan Abdülaziz, Malta, Çadır and Çit mansions were commissioned. But the palace mostly developed during Sultan Abdülhamid period. The palace which was continuously used by Sultan Abdülhamid, was physically improving on one hand, it was becoming a scene to the most politically disputable period of the Empire on the other.

All buildings in Yildiz Palace are arranged in rows, gathering in the north end of the woods bordered by high walls. The rest of the woods is comprised of an exterior garden, in this garden which is open to public with the name of Yıldız Park, there is Çadir and Malta mansions and Yildiz Porcelain Factory.