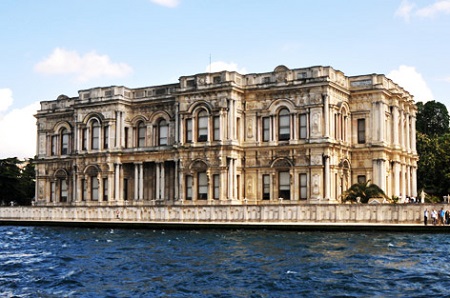 In the 19th century, Sultan Abdulaziz built the Beylerbeyi Palace, a fantasy in white marble set amid magnolia-filled gardens, on the Asian shore of the Bosphorus. Used as the Sultan’s summer residence, it was offered to the most distinguished foreign dignitaries for their visits. Empress Eugenie of France was among its residents.

Beylerbeyi Palace is located in the Anatolian side of Istanbul, on the shore Boshporus, in the province having the same name with the palace. The palace, making up a complex with the palace in the yard and the surrounding buildings, was commissioned by Sultan Abdulaziz to architect brothers Sarkis and Agop Balyan in 1864.

The palace comprises of the Beylerbeyi Palace as the main structure, sea mansions one of which is women hall and the other is progression hall located in the sea front walls of the palace, Marble Mansion, Yellow Palace and Hasahir in the backyard. While the sea mansions and Beylerbeyi Palace were commisioned by Sultan Abdulaziz, the other buildings are known to be a part of the palace once located on this spot.

Beylerbeyi Palace, the main unit of the palace complex, is a two-storey stone building built above a high cellar. The length of the palace which is built in parallel to the Boshporus is 65 meters. There are 6 saloons and 24 rooms in the palace which has staircase access from three sides. Especially Fountain Saloon and Blue Saloon which has its name from the color of its columns on the upper floor are the most impressive places of the palace. Also its garden arranged in sets is another feature of the palace.