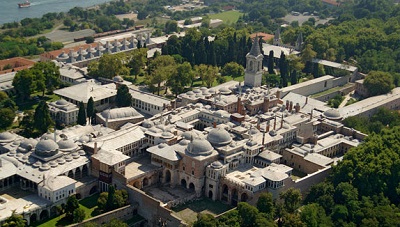 On a finger of land, at the confluence of the Bosphorus, the Golden Horn and the Sea of Marmara stands, the Topkapi Palace, the maze of buildings that was the focal point of the Ottoman Empire between the 15th and 19th centuries. In these opulent surroundings the sultans and their court lived and governed. A magnificent wooded garden fills the outer, or first, court.

In the second court, on the right, shaded by cypress and plane trees, stand the palace kitchens, which now serve as galleries exhibiting the imperial collections of crystal, silver and Chinese porcelain. To the left is the Harem, the secluded quarters of the wives, concubines, and children of the sultan, charming visitors with echoes of centuries of intrigue. Today the third court holds the Hall of Audience, the Library of Ahmet III, an exhibition of imperial costumes worn by the sultans and their families, the famous jewels of the treasury and a priceless collection of miniatures from medieval manuscripts. In the center of this innermost sanctuary, the Pavilion of the Holy Mantle enshrines the relics of the Prophet Muhammed brought to Istanbul when the Ottomans assumed the caliphate of Islam.

Topkapi PalaceWhen the construction for Topkapi Palace started is still unknown. According to some resources, the foundation dates back to 1460.

Topkapi Palace was not constructed based on a definite plan, was expanded in time and underwent several changes. This change was due to necessity of adding of new buildings or the reconstruction in place of the original buildings destroyed by fire or other causes.

Apart from the mansions for residence of sultans and harem section, Topkapi Palace also features many structures such as wards for palace guards, a very spacious kitchen for use of palace residents, dormitories for palace servants, Kubbealtı where Divan meetings were held, Hirka-i Saadet section where belongings of Hz. Mohammed and the Caliphs are kept, Gülhane Hospital, Sultan Ahmed the 3rd Library, Palace School, Treasury Office, a stable for the horses of sultan, and St. Irini Church which was used as a weapon storage for some time.

Topkapi Palace was abandoned in the middle of 19th century and lost its significance as the state center. Indeed, part of a railroad was built on the outdoor garden of Topkapi Palace which was is a desolate state in the following years. Most recently in 1924 Topkapi Palace was turned into a museum and opened for exhibition.