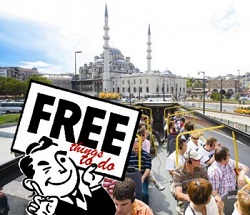 Gulhane Park: Gulhane Park is the oldest public park in Istanbul. Once part of the grounds of Topkapi Palace, this large park is now open to the public and offers a nice break from the crowds of Sultanahmet. By spring time this park is one the top spots to see the Tulip Festival.

Fransiz Sokagi – French Street: is a tribute to the French influence in Turkey, which has lasted for centuries. The Street has graceful vibe thanks to a carefully planned restoration project led by Parisian architects. The beautifully restored terraced buildings house a number of quaint boutiques and galleries as well as patisseries, wine houses, cafes and restaurants specializing in French cuisine and wines.

Hippodrome: The construction of the Hippodrome began in 203 AD by a Roman Emperor and it was completed by Constantine the Great in 330 AD. During the Ottoman era, the Hippodrome was especially used for chariot races, leading to its Turkish name ‘At Meydani’- literally ‘Horse Square.’ Nowadays, only three significant ancient monuments remain: the Obelisk from Egypt, the Serpentine column from Delphi and Fountain of Wilhelm II.

Blue Mosque: Dating from the 17th century, this architectural masterpiece is well-known for its exquisite architecture and six elegant minarets. Its name, Blue Mosque, comes from the thousands of blue and green toned tiles adorning its walls.

Suleymaniye Mosque: Built between 1550 and 1557, Istanbul’s largest mosque, was designed by the great Ottoman architect Mimar Sinan, who also chose to be buried here, the Mosque was the fourth imperial mosque to grace Istanbul.

St Anthony of Padua Catholic Cathedral: This red-brick Venetian neo-gothic building is situated on Istanbul’s busiest pedestrian street, Istiklal Street. It is the largest Roman Catholic cathedral in Istanbul and one of the most important in the city.

Valens Aqueduct: Constructed by Valens in 368AD, this historic aqueduct which connects the Bulvari Highway to the Golden Horn was a major source of water supply to the city’s palaces and cisterns for well over a millennium. It’s an under the radar attraction but if you are exploring the, why not take a look?

Haydarpasa Railway: Standing proudly on the edge of the Marmara Sea, the Haydarpasa Railway Station surely is one of the more scenic transport centers in the world. Gifted to Ottoman Sultan Abdülhamid II by his German ally Kaiser Wilhelm II, it has a Neo-Renaissance style that resembles a German castle. Just catch a ferry to Kadikoy and appreciate this beautiful building.

Grand Bazaar: Being one of largest covered markets in the world and the oldest one, the Grand Bazaar has more than 60 streets and 4.000 shops, where you will find an authentic oriental atmosphere and all kinds of gifts: from leather clothing and to jewelry and hand-woven fabrics. Be tempeted!

Spice Bazaar: The Spice Market hosts 88 shops, all under the same dome. This market, also known as the Egyptian Bazaar is a place that will make all your senses happy. You will feel alive while smelling the spices and herbs, tasting delicacies, seeing the vivid colors and hearing the sounds of the crowd.

Caferaga Medressi: This former Ottoman medresesi (religious school) is now a state sponsored Fine Arts College. Constructed in 1559 by the Ottoman architect Mimar Sinan, Caferaga Medresesi is located next to near Hagia Sophia in Sultanahmet. It offers a large variety of workshops on handicrafts and music, as well as hosting music and art exhibitions. Students exhibit their works in the rooms of the Medrese and visitors are free to wander these.

Please kindly add your free things to do list for Istanbul. We will review and publish it here with pleasure.